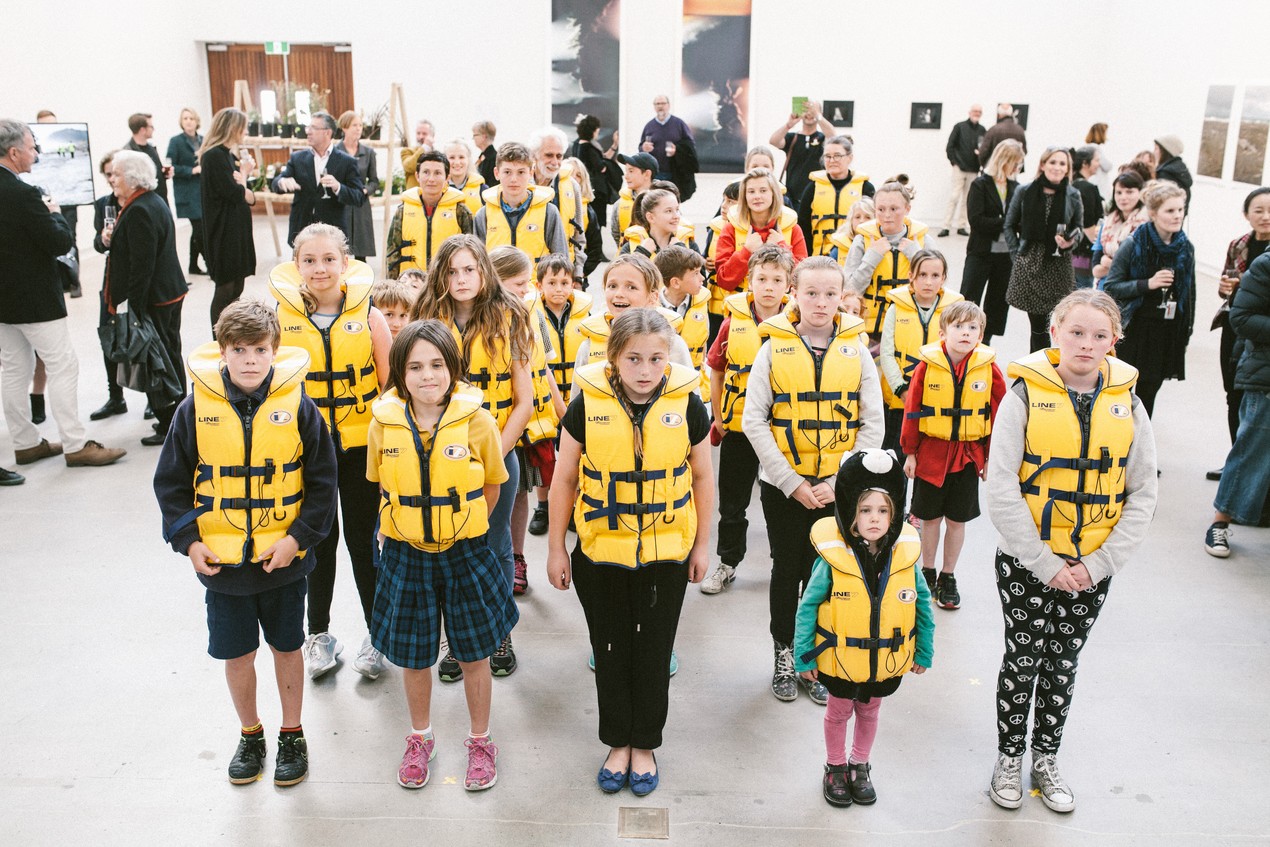 School children in bright yellow life jackets standing in formation. Melissa Macleod’s Performance, Drill, relocates a snapshot of what is practised at South New Brighton School; students completing an emergency tsunami drill. This is a necessary and basic response to the recent earthquakes and tsunami warnings. Through repositioning this ‘normal’ coastal activity inland this work aims to create an awareness of daily life in the East, unseen by other areas of Christchurch.

Sitting in tandem with Drill, the installation, Weight, explores a further layer in connection with the sea and coastal existence. Determined by capturing tidal water that overflows the gutters, Weight responds to the effects of lowered land (post earthquakes) and increasing sea levels. The water tanks in the Mair Gallery have been filled with the sea - an amount measured in relation to the King Tide that regularly covers the road on the street corner near Melissa’s house.

While the sea represents a vital part of life for some in Brighton, it is equally an unmeasurable force that demands respect, and increasingly the burden of excess water is becoming an issue that needs serious attention. With climate models predicting increasing temperatures and with them rising sea levels, it could be that New Brighton, like many coastal communities, becomes uninhabitable in the foreseeable future. Its residents who have remained since the quakes, despite the liquefaction and compromised infrastructure, may be forced to relocate to higher ground. Given the lower socio-economic status of the area, the population could become some of the first of Aotearoa’s climate refugees.

If the rate of sea level change continues as predicted, this will be within the lifetimes of today’s children. We are already seeing our neighbours in the Pacific inundated by rising tides. By perpetuating our current, carbon heavy lifestyle without thought, what future are we handing to the next generation? Can we continue only equipping them with temporary buoyancy aids for a future in which they’ll need to learn to swim through storms rougher than those we can currently imagine? Through the depositing of this physical and psychological load onto the CoCA floor, Weight aims to share the burden and bring focus to one of numerous current concerns circumventing coastal communities.

Sometimes you cross paths with someone you don’t expect to learn anything from. That throws you. On Sunday I had 3 trips to the local garage to use the compressor. My car was packed with leaking inner tubes. Grey from tire dust, I had to explain myself. He might be 22.

I said - I am making this work        filling these 3 tanks      but having to displace water due to the bloody gallery floor loading. He said- helium is lighter than air.             I have to work within my means. I have the air easily accessible here. I have been running around like a nutter enough as it is.         He said true,          but kept thinking of helium.       The inclusion of these inflated tires is making me feel sick actually. I really hate not being truthful with the materials. But you will let people know?   Right now only you know.     But it is actually more interesting that the actual weight of the water is too heavy, that it would break the floor     that one flood is too much.         Out of limitation often comes the most interesting part you know.     You have to be honest with people.

He gave me cello tape for the leaks. It worked surprisingly well.

CoCA and Melissa Macleod would like to extend thanks to: 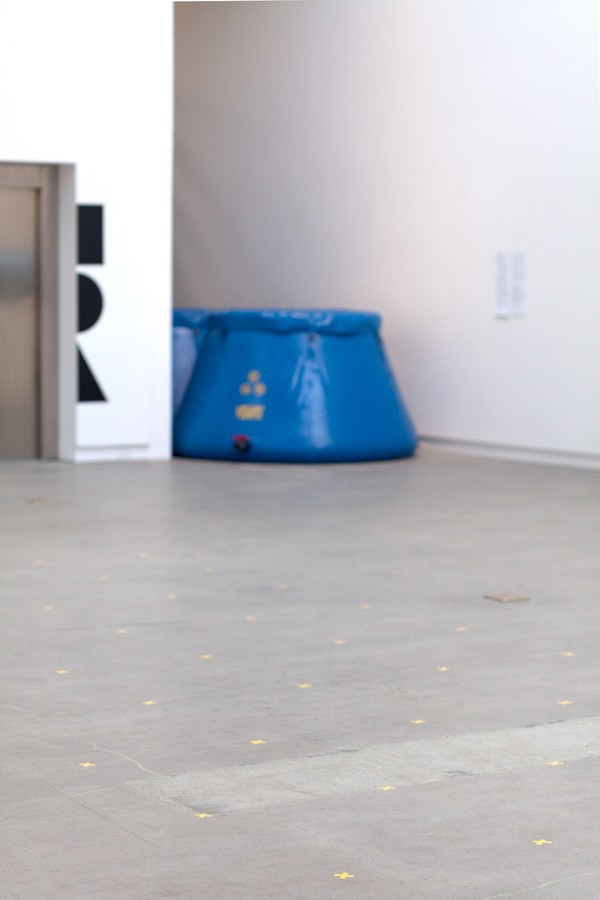 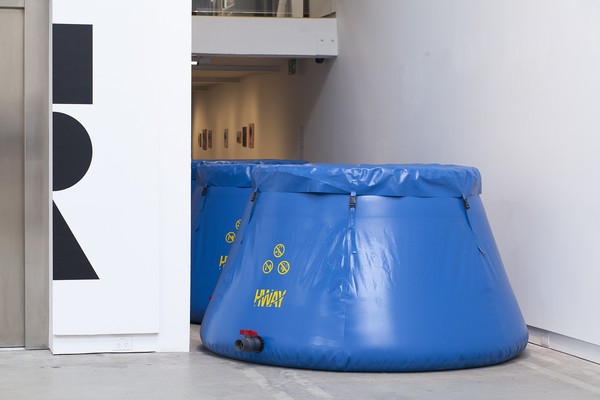 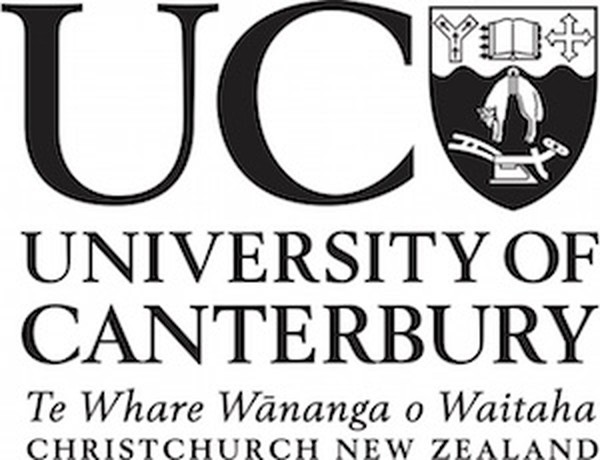 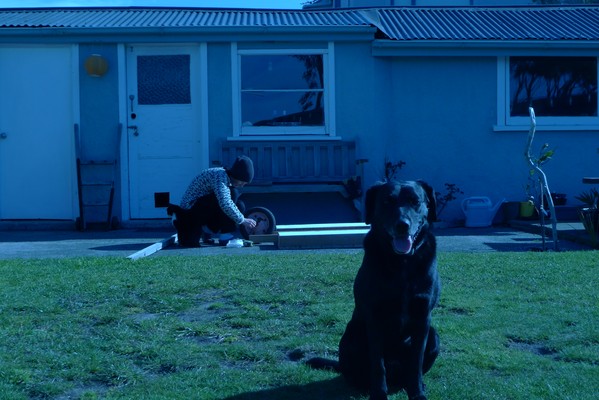