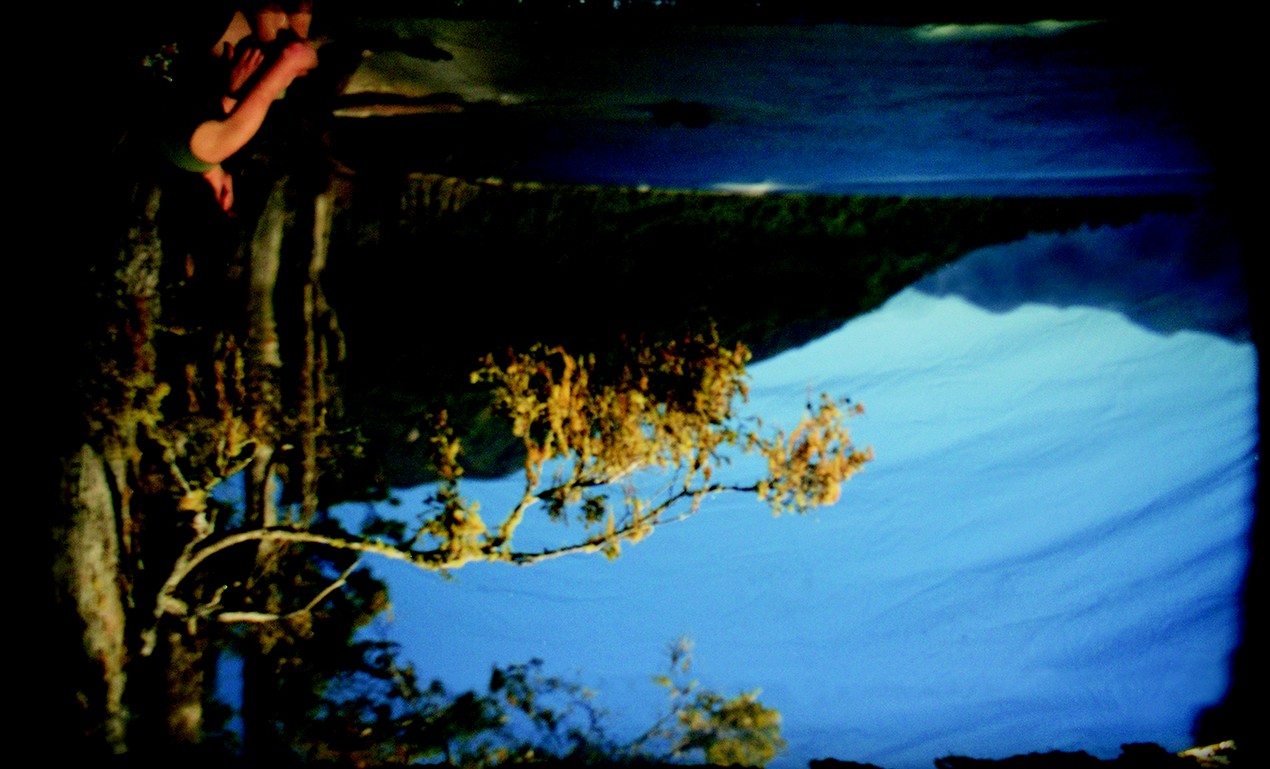 Tirohanga is tied specifically to the land of Aotearoa New Zealand. It takes the narratives of Bridget Reweti's iwi at Tauranga Moana as a starting point, to explore our understanding of the land and landscape.

The work challenges the ideas of the wild, untamed, sublime Aotearoa New Zealand landscape, as first told by the 18th Century European migrants, offering an alternate perspective from Te Ao Māori through its quiet observation.

Bridget Reweti is a Ngāti Ranginui, Ngāi Te Rangi artist. Her moving image and photography practice explores customary Māori concepts within a contemporary context. Her primary concerns are Māori narratives and names pertaining to the landscape and the portrayal of these through traditional photographic techniques.

The sublime landscapes of New Zealand’s national parks are often viewed as uninhabited wilderness – places to visit, but not to stay. Tirohanga questions this idea. Reweti records her presence in these landscapes as matter of fact.  Using a combination of contemporary and historical photographic techniques infused with customary Māori names and narratives of place, we are quietly invited to look again at these vistas, and consider that the land has always been inhabited.

Bridget has exhibited widely in Aotearoa, and recently participated in the Indigenous Visual and Digital Residency at The Banff Centre, Canada. She is part of Mata Aho Collective a collaboration between four Māori women artists commenting on the complexity of Māori lives. Bridget is also a founding member of Kava Club, a Wellington based collective of Māori and Pacific artists, performers, activists and supporters.

She also has a forthcoming exhibition in Christchurch:

Bridget Reweti’s whenua-based video artworks (1) exude an everydayness so disarming it almost camouflages their wero to colonial landscape conventions (picturesque, sublime, wild, pure, natural). Almost, but not quite – because the everydayness is the wero. Each piece functions doubly, both as a gentle yet steadfast positing of one way of relating to the Aotearoa whenua, and as a casual subversion/negation/undoing of another. Double but not binary: the differences in inheritance also bubble up and mingle infinitessimally on the surface of these lands and Reweti’s screens.

In the series undertaken in 2012 for Reweti’s MMVA (Master of Maori Visual Arts) – including Can I be in your video?, Are you still recording? and Excuse me you’re in my shot – small groups of people lackadaisically erect tents in outdoor spots, water sparkling and lapping in the background. In I thought I would of climbed more mountains by now (2015), mountain-climbers with backpacks walk nonchalantly across dual screens, glancing rarely at the high-altitude snowy ridges they traverse. In Get up earlier (2015), people again hoist on gear and amble off into the only-slightly-snowy tussock for a ski. What little happens, happens slowly. Acentred framing cuts people off at the shoulders or knees, picking out nothing for special attention. The action unfolds in a real-time that has already started and doesn’t end. Small positings of what Reweti has called ‘practical residency in outside space’, marked by that quiet everydayness affect (and not a little wry humour).

Yet these works are also small negatings. Unaestheticised, uneventful, unheroic, unselfconscious, they are foils to the other views also glimpsable on Reweti’s multiple screens. In the 2012 series, the makeshift tent slowly materialises as a camera obscura (early ancestor of the modern camera), and the view from within those tents appears alongside the ‘action’ scene on a second channel. The great outdoors, passed through a needle-eye, inverted and projected onto an interior canvas wall. Outside space becoming a flat, soft-focus, colour-tweaked image with a fade-out frame. That is a landscape. In I thought I would of climbed…, the mountain-climber scenes are Intro’ed and Outro’ed by a still, grave, triple-channel projection of snow, mountains and low-rolling cloud. And gradually the harmonic hum of voices on the soundtrack registers as a screwed version of rasta-pop classic The Rivers of Babylon (2). That is a landscape. But before you can get all Zion on the Adams Wilderness area where the footage was shot, inhabitants appear, the sublime surge passes and life goes on – complete with un-co’ fumblings with high-tech tramping gear. Neither Zion nor Babylon.

In Reweti’s titles, everyday phrases – ‘your video’, ‘my shot’ (all verbatim quotes from the foley sound of the videos) invoke a still-kicking possession-anxiety amongst users of the Conservation Estate. That possession-anxiety that came nestled inside European landscape imaginaries, and scarred whenua, cultures and psyches before settling again inside the contemporary photographic vernacular, now heard from passersby on the shores of Tauranga Moana. Unresolved desires sublimated in the easy taking of pictures? Shot as land grab?

But Reweti’s replay of the possessives is teasing, and her shots don’t possess. They tell the idealised landscape like it is: upside-down, inside-out, blurred, truncated. Her people don’t possess either, nor do they ascend, triumph or conquer – unless invading the camera obscura image counts as conquest. There they are, part of the upside down picture, smiling in front of nature for another’s camera; or gazing inscrutably at the sea-scene. Wait long enough, they suggest, and any landscape will reveal inhabitants. Inhabitants who instead of possessing, release the land from its representations. Back through the needle-eye. Inhabitants whose knowing of their whenua is enacted but undeclared, needing no witness to affirm or deny it (3). Inhabitants whose non-grand, non-euphoric, matter-of-fact actions in and with and for their whenua might be profoundly decolonising. Inhabitants who, being of this land, also keenly remember Poutini, Waitaiki, Tamaahua, but aren’t about to offer them up here. Inhabitants who look just like any other mountain climbers, really.

For Reweti’s frank image-making also practices an opacity with respect to cultural knowledge that operates as its own gatekeeper. If you know, you’ll pass through. If not, you’ll keep walking – but as you do listen hard and you might hear the teasing call: Excuse me? You’re in my shot.

3 ‘Wherever we see nature as a passing scene rather than a rhythm and a process, we deny the umbilical connection to place implicit in the Māori word whenua. […] The most practical means of preserving wild nature is residency in it… the forests need their people back. Not visitors treating them as scenery, but people who consider them home and invest them with love and vigilance.’ (Geoff Park, Theatre Country 142) 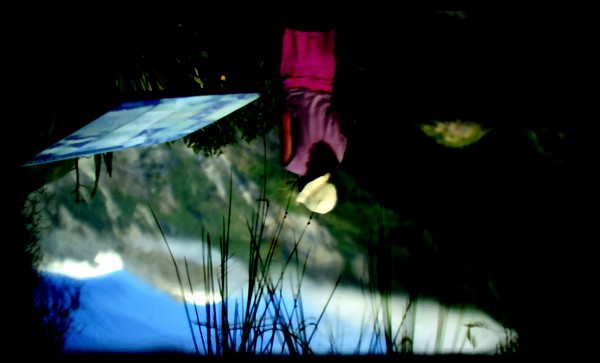 Bridget Reweti, Can I be in your video? (still). 2012. Two channel digital video 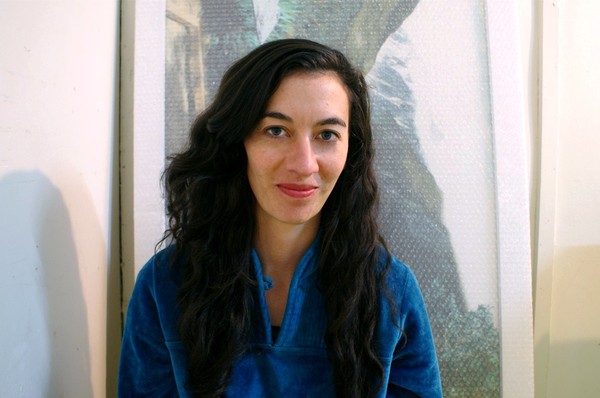 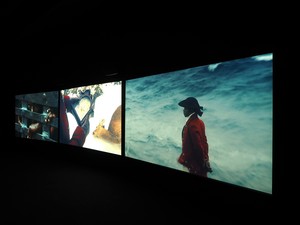 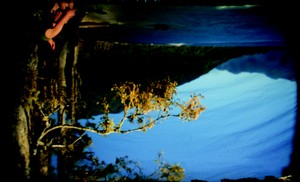 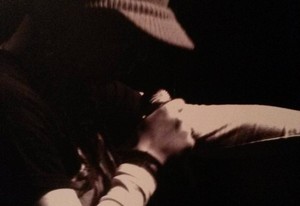 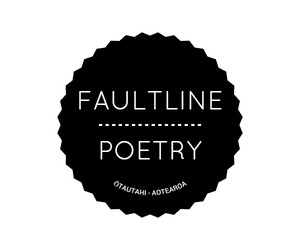 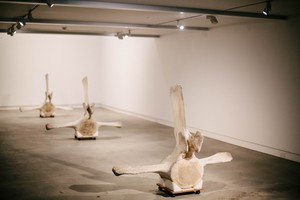