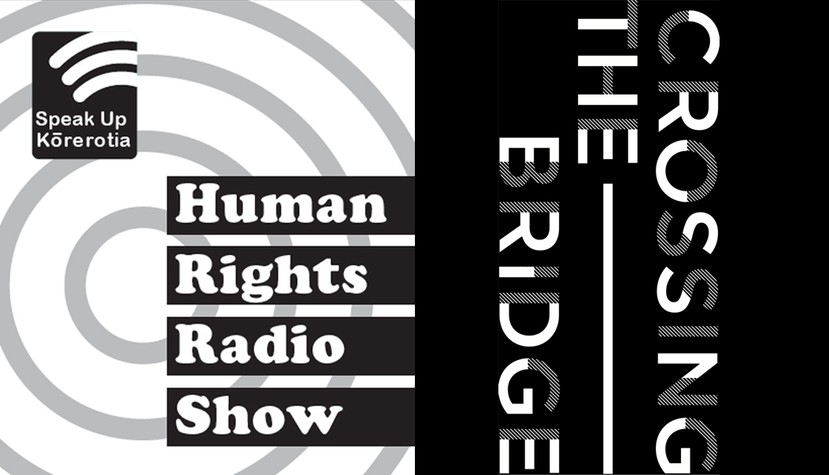 Join us for a double bill of talks and a celebration, 5:30PM in the Ground Floor Gallery.

Sally Carlton of Speak Up Kōrerotia Human Rights Radio Show series celebrates the show's relaunch with us and reflects on Vertigo Sea and Tirohanga.

Speak Up Kōrerotia covers some of the key issues relating to human rights and provides a space for guests to “Speak Up” and share their thoughts and experiences.

Having lived in countries across four continents, Sally Carlton is now based in Christchurch. She works for the New Zealand Human Rights Commission and the Citizens Advice Bureau, and conducts her academic pursuits into the situation in post-earthquake Christchurch. She is also involved in the 'ANZAC Remembered' project headed by Monash University in Melbourne, which aims to gauge attitudes to the commemoration in various locations around the world, and hosts the human rights radio show "Speak Up-Korerotia."

Crossing the Bridge is a Project carried out by Anthropologist Sophie-Claire Violette, Photographer Petra Mingneau, Videographer Vanesa Paredes and Producer Lucy Holland. It focuses on migrants and their experiences integrating into a new community and creating a sense of belonging while negotiating their own identities in different communities.

The project was exhibited in Ashburton at Baring Square East, in the form of multidimensional public art exhibition which brough together photography, film and individual narratives. Eight portraits from the series are now being exhibited at Lux Cafe at CoCA.