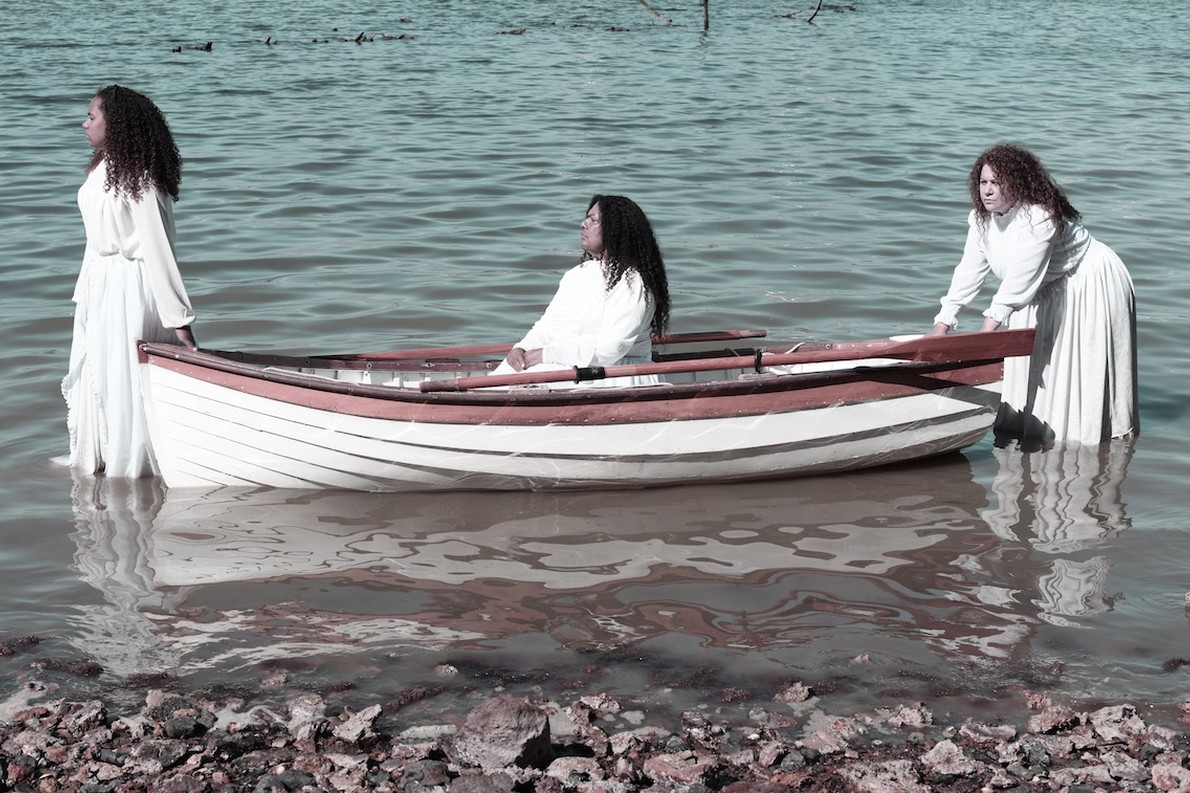 A swollen belly is a universal image of care, hope and new life. A mother and her unborn child cradled in her hands. What then is a belly when swollen with lives stolen from distant shores? The bellies of slave ships that made their way across the Atlantic and Pacific Oceans, tearing people from their homes in the ultimate action of dominance and supremacy, reducing whole islands and lands to commodity and status.

It’s impossible to reconcile these two images, where one represents the potential of a life yet to come, the other is of potential wilfully destroyed. We carry forward that which we are born into.

In a bay along the coast of Kōpūtai, there is a ship that lay below the surface of the water. Kōpūtai is known today as Port Chalmers, a name that was deliberately placed on the landscape by Pākehā settlers who didn’t like the name Kōpūtai. Kōpūtai, recorded in 1879 by Ngāi Tahu kaumātua as a kāinga nohoanga, urupā and wāhi tapu, had a name imposed on it to recognise a Scottish man who never stepped foot in Aotearoa.

This ship lay in a bay that may once have had a Māori name but is now named Deborah Bay, for the name of a boat that once moored, for a few months, in it. As the tide laps out of this bay, more of the ship is revealed: it is a skeleton whose remains are made visible as the water recedes. This ship, known by various names but most infamously as Don Juan, once carried people away from their homes, taken from the West African coast to the Caribbean, from the islands of the Pacific to Australia and as far away as Peru.

In this small bay, bordered by a road that is driven by many who would be ignorant of the deeds of the Don Juan, a family descended. Above the watery remains of a ship that once held their stolen kin, they rowed. The remains of this ship are swollen and twisted, rotting and receding. Circumnavigating this ship are generations of women who are mere generations away from those who were taken. Yet the pain and disconnect is there. It’s there in their breath, strained as they row, blessing these unholy waters with a reality that is compelled to heal.

Here in this gallery you can see a pair of shackles recovered from the Don Juan. When the ship was dismantled, a false wall was uncovered behind which manacles and shackles were discovered, they are a potent reminder of the ship’s violent past. One pair of shackles is now on permanent public display at Port Chalmers Maritime Museum and another is held at the Auckland War Memorial Museum collection. The main audience in Port Chalmers are tourists disembarking off cruise ships, their freedom of movement being the ultimate paradox to the slave ship carrying stolen bodies across water. In this setting, you could be forgiven for thinking that the impact of the shackles has been neutralised, that they are a part of history that has happened. However, as someone who works around taonga, I know for certain that objects are not inherently passive. Kei te ora tonu te mauri. Kei te ora tonu te wairua.

In the Port Chalmers Maritime Museum display, interpretation of the shackles focuses on the ship’s origin and its relevance to the site. The shackles sit in a cluttered vitrine alongside other objects related to Deborah Bay, including egg cups carved from timber of the Cincinnati, a vessel owned by slave trader Bully Hayes.

In this gallery, the artist has intervened in the narrative surrounding the shackles by isolating them into an oversized vitrine and retitling them as Tools of the Trade. This recontextualisation centres the voice of descendants of the slave trade and ensures the prominence of their histories are foremost.

Histories are fluid, and often told by the victors. Uncovering that which has always been covered over is a case of endurance. It is carried through generations in the laments that call to descendants and urge them to remember. Jasmine tells me of the songs that people in Vanuatu still sing, they recall the time when ships came into their harbours and took away cargoes full of stolen people. The tenor of these songs reverberate through the hearts of descendants and can be felt by other indigenous peoples who have experienced violence at the hands of colonisers. Our histories are not the same and Jasmine’s is not mine to claim and yet, there is a resonance in our empathies.

Watching this video, talking with Jasmine and her family, I feel myself being swept out to sea. The tide that reveals the remains of the Don Juan is pulling me away. There is a gulf between their family’s experience and mine. Jasmine’s mother, Christina, blesses the remains and speaks to them. Above the sound of the waves that are tug at me, her voice is an anchor. This is not my history to emancipate, but I feel a duty to not just listen but hear. I feel a duty to bear witness, to find meaning, and to take that forward. As tangata whenua, though not mana whenua to Kōpūtai, I have a duty to tell our histories in our own tongue. This may be a way to undo the imbalance of the archive where the record of the victor is writ large. I am reminded again of something Jasmine has written about the archive: “These archives have a currency of ‘truth’ which governs and defines value.”

This value, that has seen truth assigned to the written record, value that assumes that what is written is an infallible truth, has concurrently ignored the authority of the tongue. I am reminded too of how Māori used the pen to petition settler colonial governments, our tīpuna recognised the power of the pen and used the might of it to advocate for our rights. These records survive in government institutions, they too are potent reminders of how indigenous people learn to be nimble, and that to be nimble is to survive. Engari, ko te pene tuatahi, ko te arero. And yet, our first pens are our tongues.