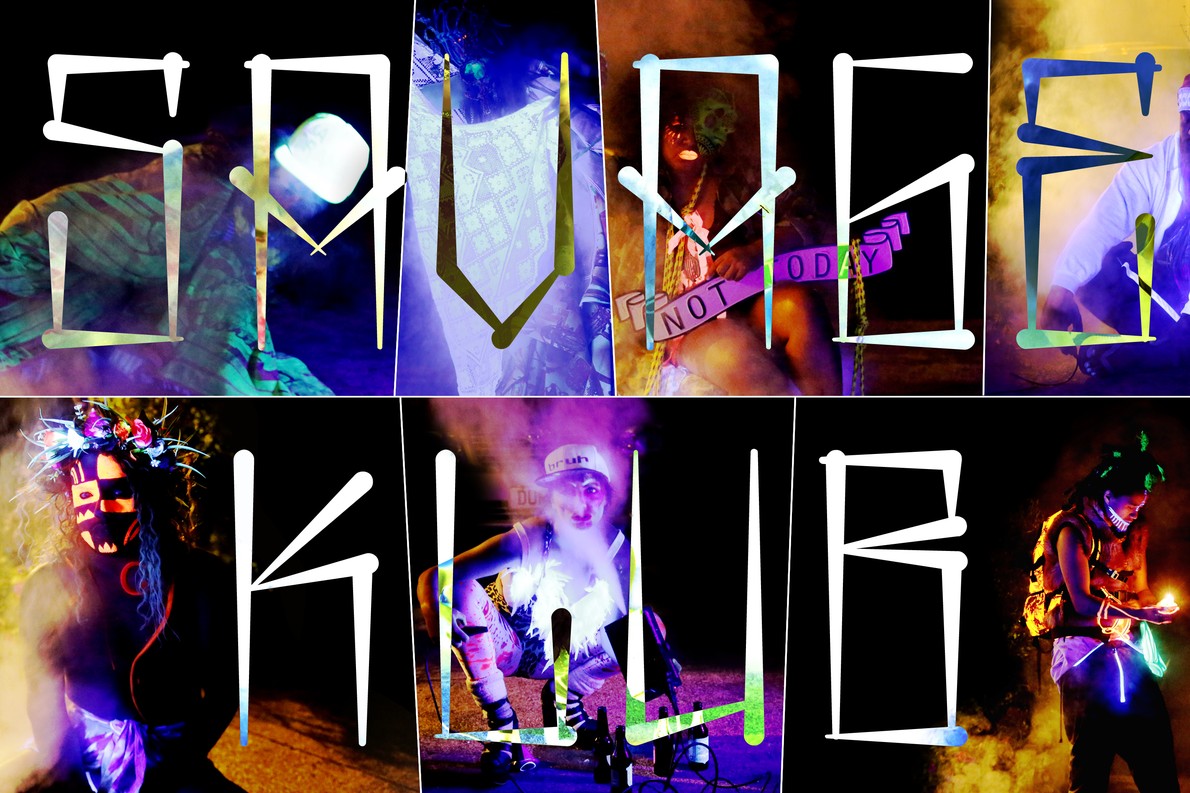 OutTASpace gestures to an aesthetic of neo-savagery - bringing a playful electricity to traditional forms, and lighting up that which is new, that which is queer, that which is gentle and that which is curious into the work, in order to invite these multiple presences to exist alongside more culturally entrenched ways of being.

The SaVAge K'lub was first conceived by artist Rosanna Raymond in 2010 and is named in reference to a historical gentleman's club first established in London in the nineteenth century. Raymond's version has drawn on the cultural stereotype and decor of such exclusive institutions, while removing the gendered and elitist aspect entirely. Drawing together myth-makers, navigators, hip shakers and acti.VA.tors from around the globe, The SaVAge K'lub has evolved into a collective that brings knowledges and practices of many individuals to engender Raymond's central kaupapa: to bring about the non-cannabilistic cognitive consumption of 'the Other'. It is now a multi-disciplinary vehicle built to discuss ideas of space, hospitality and what it means to be framed as a 'savage' in the 21st century.

The 'VA'  in SaVAge is integral to the collective methodology - referring to a Samoan philosophical understanding of space as relational. Space is therefore not empty or passive, but 'active' - variously activated by people, relationships and reciprocal obligations.

OutTASpace marks a SaVAge K'lub exhibition in absence of its founder and the collective has been both intensive and intentional in cultivating methodologies that reflect this change. SaVAge K'lub is a living space of negotiation, and as such resists further definition. Engaging relationally between practice, people and places, OutTASpace places the 'TA' or 'VA' at the centre of our engagement with Ōtautahi - making an opening for relationships that are continuous, embodied and specific to thestories of the whenua onto which we are invited. OutTASpace gestures to an aesthetic of neo-savagery - bringing a playful electricity to traditional forms, and lighting up that which is new, that which is queer, that which is gentle and that which is curious into the work, in order to invite these multiple presences to exist alongside more culturally entrenched ways of being.

Each artist has approached The SaVAge K’Lub platform as individuals who contribute to the collective theme of the show. Through processes of dealing with recent events within and outside of the K’Lub the artists are leaning into a collective that is forever shifting, growing to find placement within the many paradigms the K’Lub embodies.

Back to MAKING SPACE overview

Jaimie Waititi is of Maori (te Whanau a Apanui me Te Rarawa ki Te Ika a Maui) descent with white French-Canadian, Scottish and English heritage. They are a 2 spirited, gender fluid biological female brown body. Through pared back activations they convey their body is political. Growing up in a coastal hapu of the East Coast of the Bay of Pleanty Waititi communicates concerns with the environment, racial and cultural politics, working conditions and the gender and queer spectrum.

Recently returned from Melbourne, Waititi alongside Rosanna Raymond and Reina Sutton enjoyed a two-week intensive workshop with 5 Kulin natives in preparation for a sold out show at ACCA for AsiaTOPA with Next Wave. Previously Waititi has participated in many SaVAge K’Lub activations from the closing of APT8 at QAGOMA in Brisbane (2016), PAA panel discussion run by Rosanna at the Auckland Museum, as the time keeper (2016), VPMA (2016) to many community events.

Julian Chote’s art practice centres on the body, collaboration, gender, energy, making regalia and sound. Conversations around dismantling gender constructs and exploring the truth beyond them is embodied through their activations; creating space through tenderness for representations of self. Navigating forms of ‘femininity’ that are accepted and that are also stigmatised: hairyness and earthyness vs makeup, thinness, clothes, products. Re-shaping, melting immature masculine identity. Embracing the truth that we are spiritual beings, and that the body is an illusion, and that gender is not a binary.

Interdisciplinary artist Numangatini Mackenzie works in graf, tatau and mixed media installation. His practice centres on the exploration of urban space and the processes of building connections to his Pacific heritage and people. His research engages with literature on Oceanic art, museum collections as well as collaborations with living practitioners of art forms ranging from tatau, painting and spoken word to voyaging/navigation and street art. Numa often responds to these experiences and sites of investigation through large public graf installations, performance and printmaking. He is actively involved in cultural heritage projects, performative acti.VA.tions, research and community development in New Zealand, where he is now based, and the Cook Islands.

Numa was born in Canada where his hunger to understand his culture grew, which prompted him to move the Cook Islands in 2009. His move gave Numa the opportunity to grow family ties and his understanding of cultural arts like tapa, tatau and voyaging.

In 2011 Numa was honoured to participate in the Pacific Voyagers “Te Mana O Te Moana“ Voyage, sailing throughout the Pacific on Marumaru Atua – the Cook Island double hulled vaka/canoe that accompanied six other canoes from across the Pacific. The mission of the expedition was to use the wisdom of the ancestors, combined with modern science, to propel the Pacific into a more sustainable future. Recognizing the pacific ocean as a living entity in need of protection and to re-awaken the next generation with cultural values through the traditions of voyaging.

The voyage took him across the pacific to the Solomon Islands to participate in the 11th Festival of Pacific Arts. The experience exponentially grew his Polynesian family, cementing his belief of the unmatched connections between Pacific peoples and allowed him to share his artwork throughout the Pacific.

This voyage, like many since then, has given Numa the knowledge to stand in the worlds largest Polynesian city with community, has exhibited work in Canada, The Cook Islands New Zealand and Australia.
He now resides in Auckland New Zealand

I am a graphic artist, I graduated from Whitecliffe College of Art and Design with a BFA (majoring in Graphic Design) in 2001 and earned my MFA in 2013 from the same institution. I have been an exhibiting artist since 2003, with my first Solo show at Fresh Gallery Otara in 2008. I aman Art Mentor and Tutor for Tautai’s Fresh Horizons programme, which is an outreach intiative that introduces senior high school students into Tertiary Art School training. It also aims to promote the viability of acareer in the Arts Sector. I have been an Art Tutor in Graphic Design, Sculpture, Interior Design and Screenprinting at Unitec (2010-11),Whitecliffe College of Art and Design (2012-13) and MIT (Faculty of Creative Arts) (2014). I am the co-chair of Tautai Contemporary Pacific Arts Trust.

I am a visual and performance artist, I also work in multi disciplinary forms, sculpture, printmaking and moving image. My wife and I run ascreenprinting business which combines my passions for print making and graphic design. I am a member of the Savage K’lub and I am looking forward to contributing to MAKING SPACE in Ōtautahi.

jess holly bates is an interdisciplinary pakeha artist who works with bodies, text and visceral objects to mobilise conversations about critical whiteness and the slippery feminine. Her work unpacks embodied histories, turning over a colonial sensorium to imagine the disruptive knowledges living in our genealogical matter. 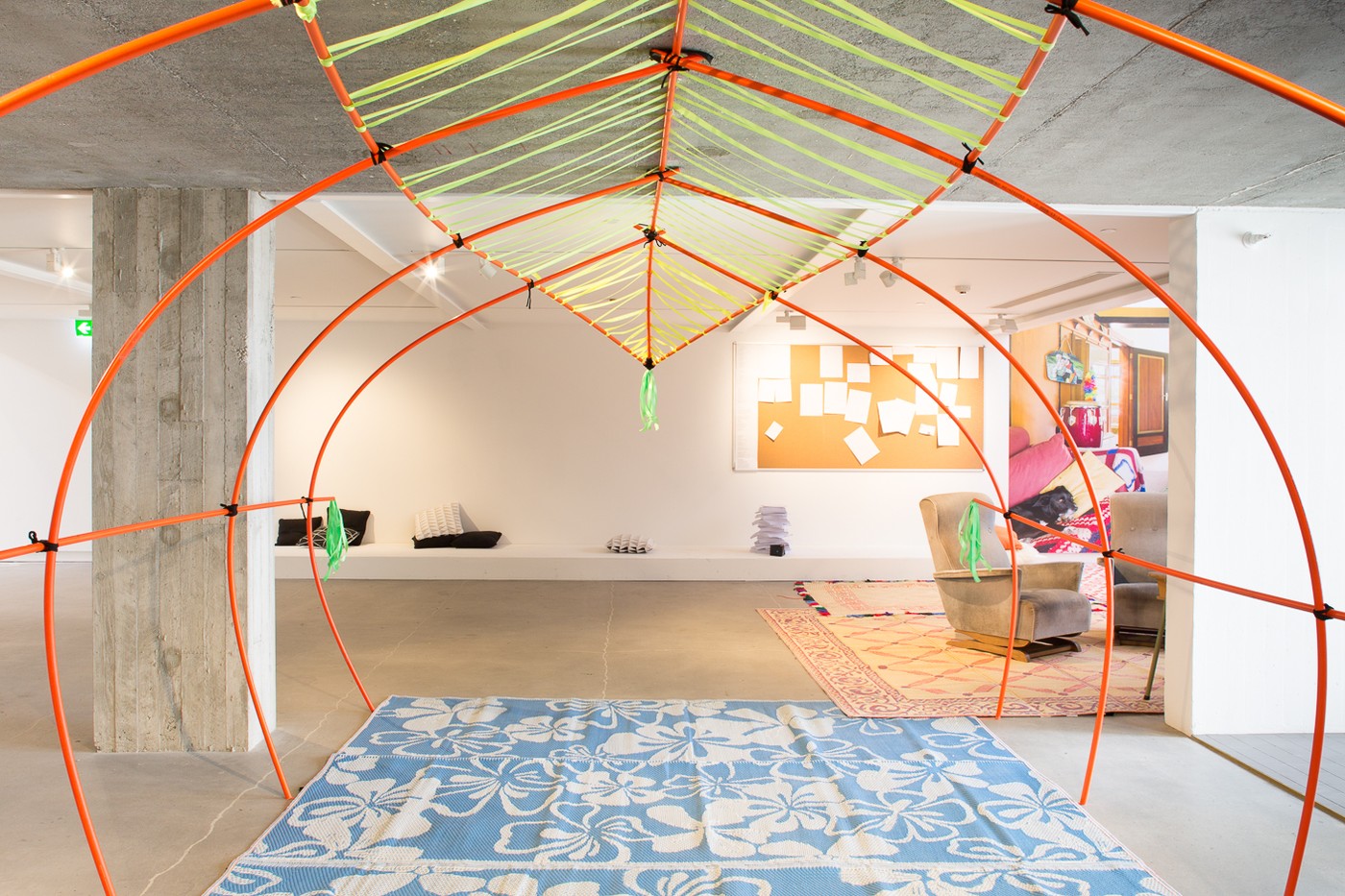 This represents the first safe space for us. When the Vaka is pulled to land it is turned over to create shelter. A safe space for protection from outside forces. A place to deliberate/talanoa/hui. A space to rest/entertain or work. Like the vaka it is lashed together for strength and security representing the bounds that reach back generations through shared knowledge from one island to another.

A homage to all the shades of saVAges out there .know and unknown. Past present and future.
Acrylic paint pen
Aerosol paint 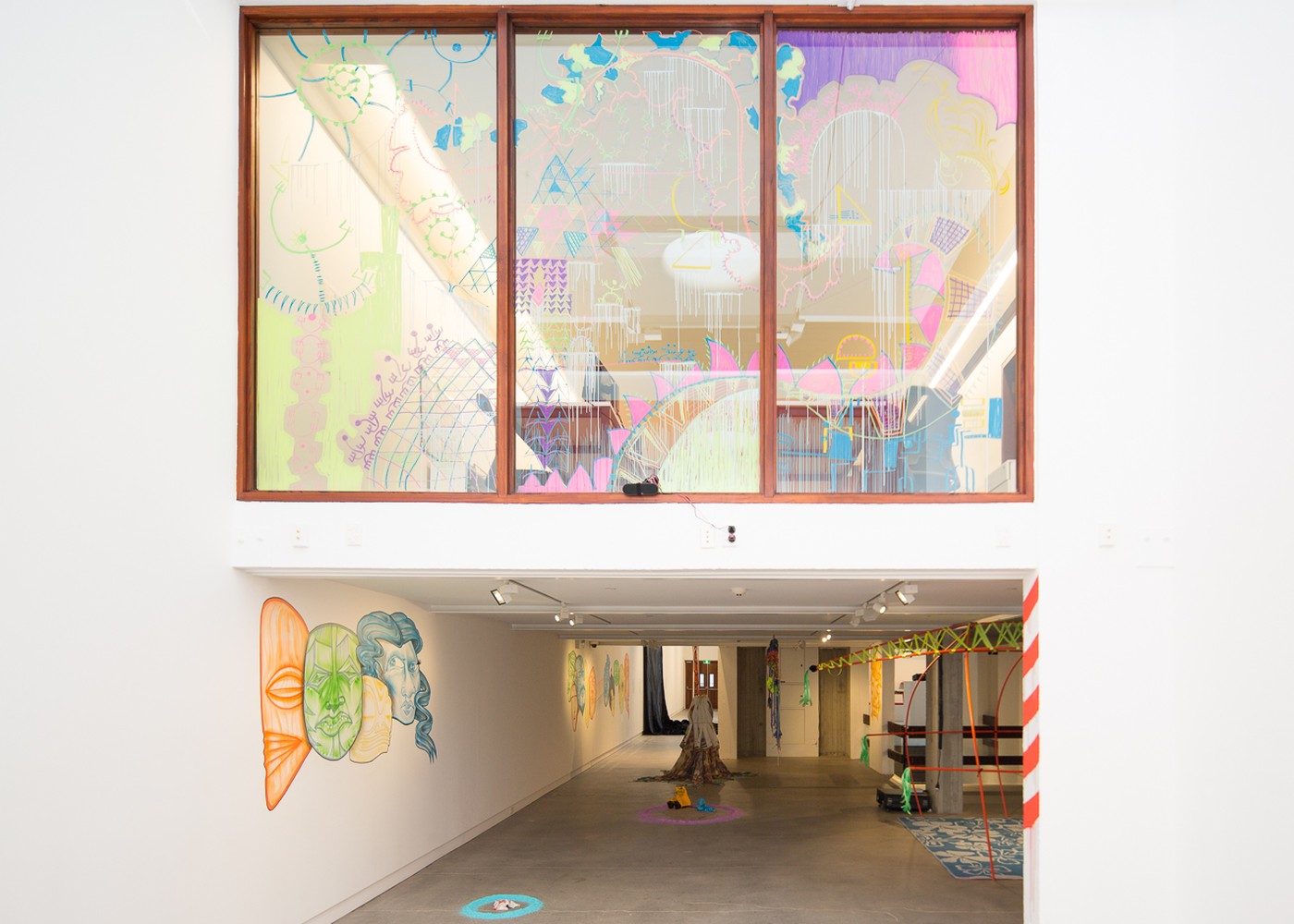 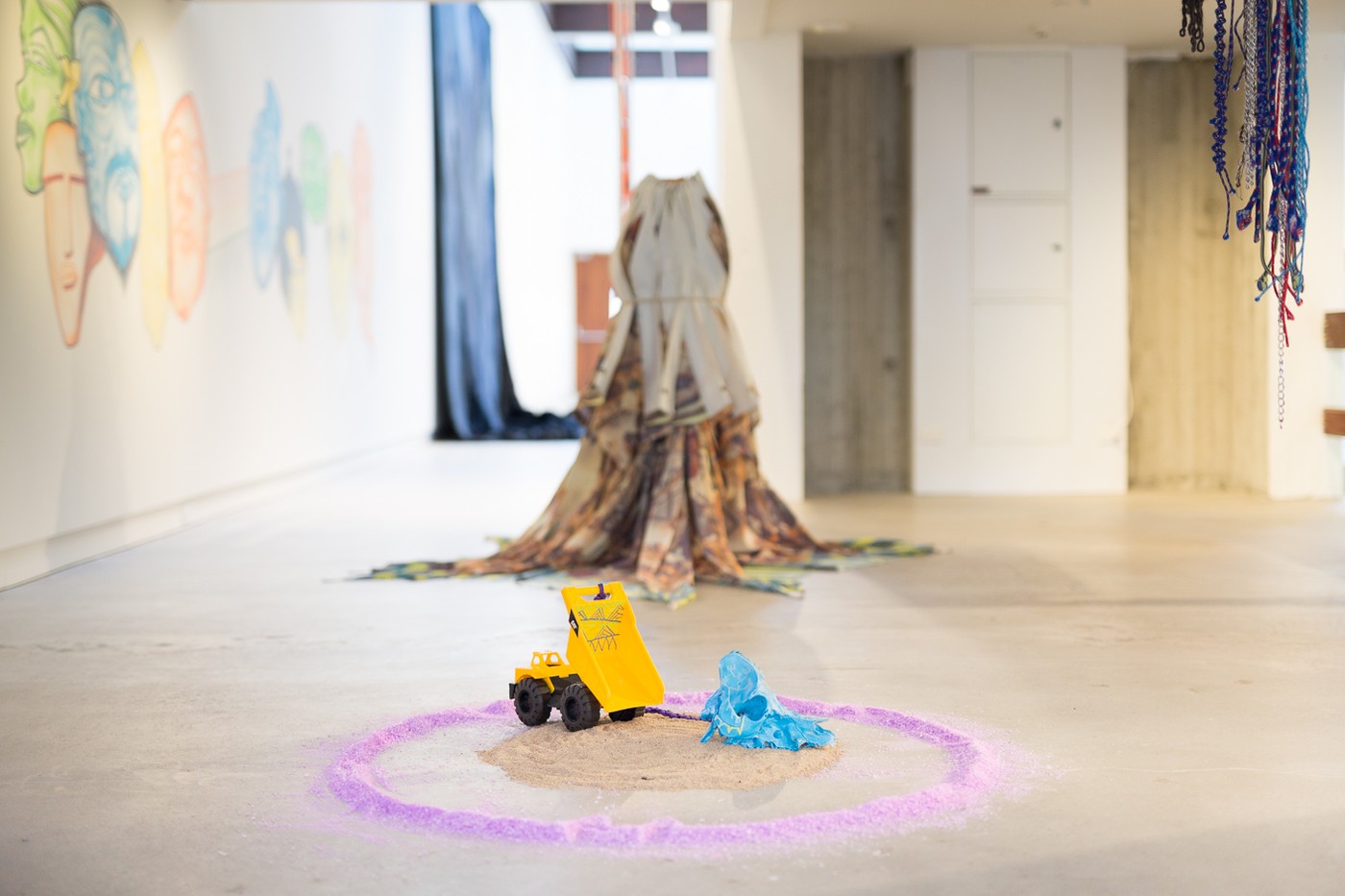 tote is an acknowledgement of the way we arrive - it is the phenomenon of buoyancy by which our ancestors travelled. In this space, it is an invitation to negotiate the relationship of our body to space, and to land - opening these knowledges, by sitting with and moving through the neo-whenua of tote (salt). 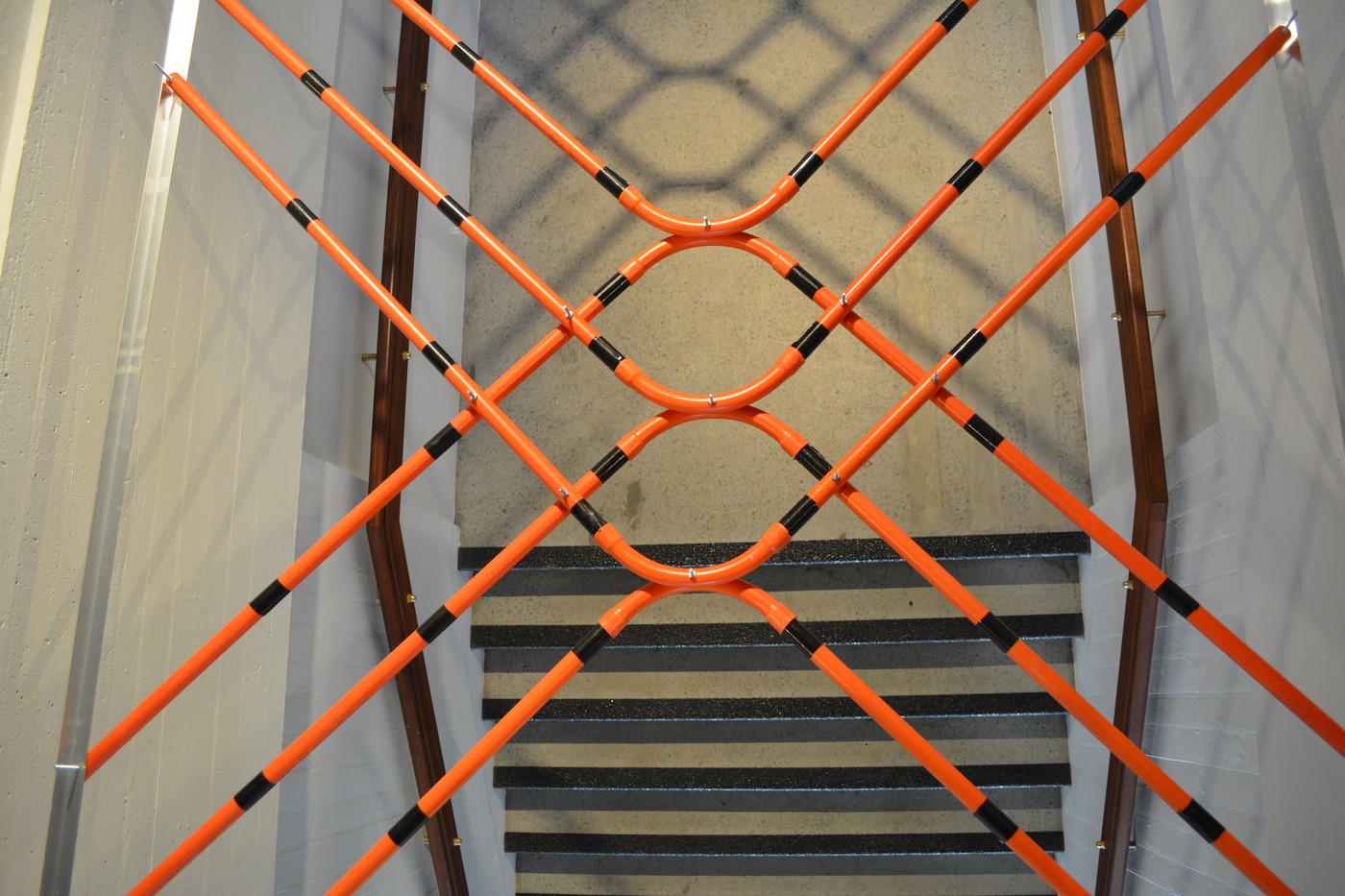 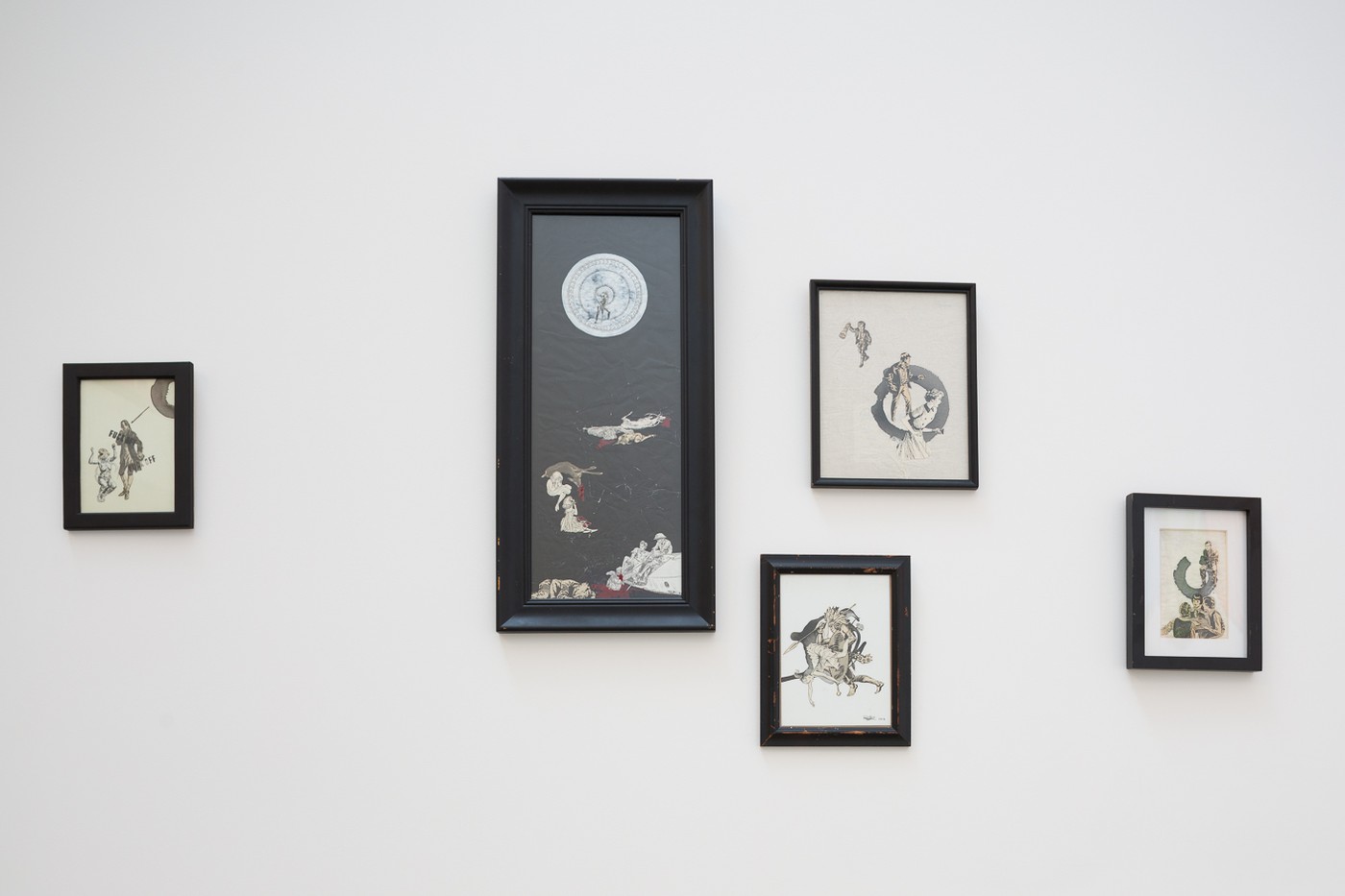 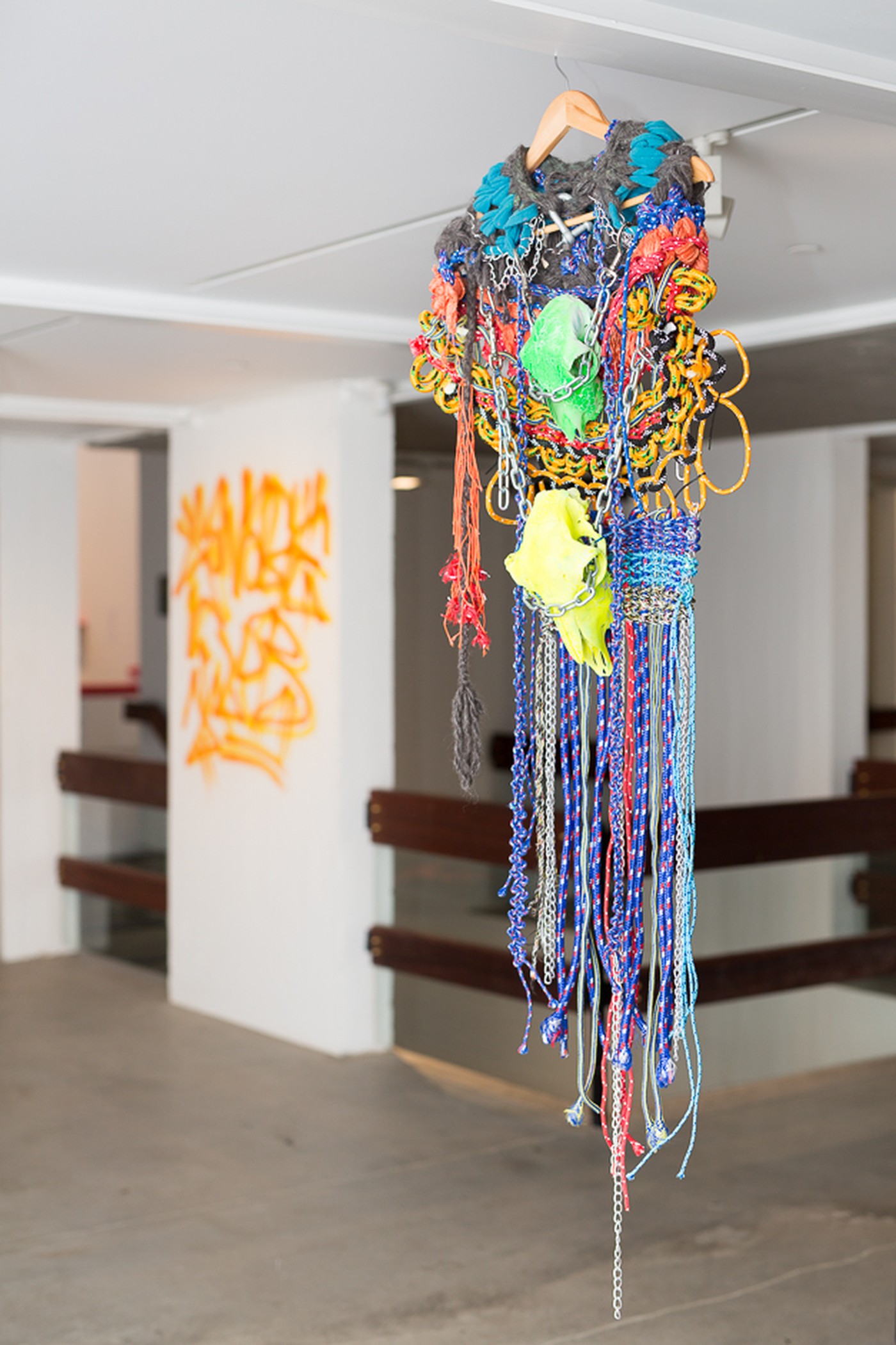