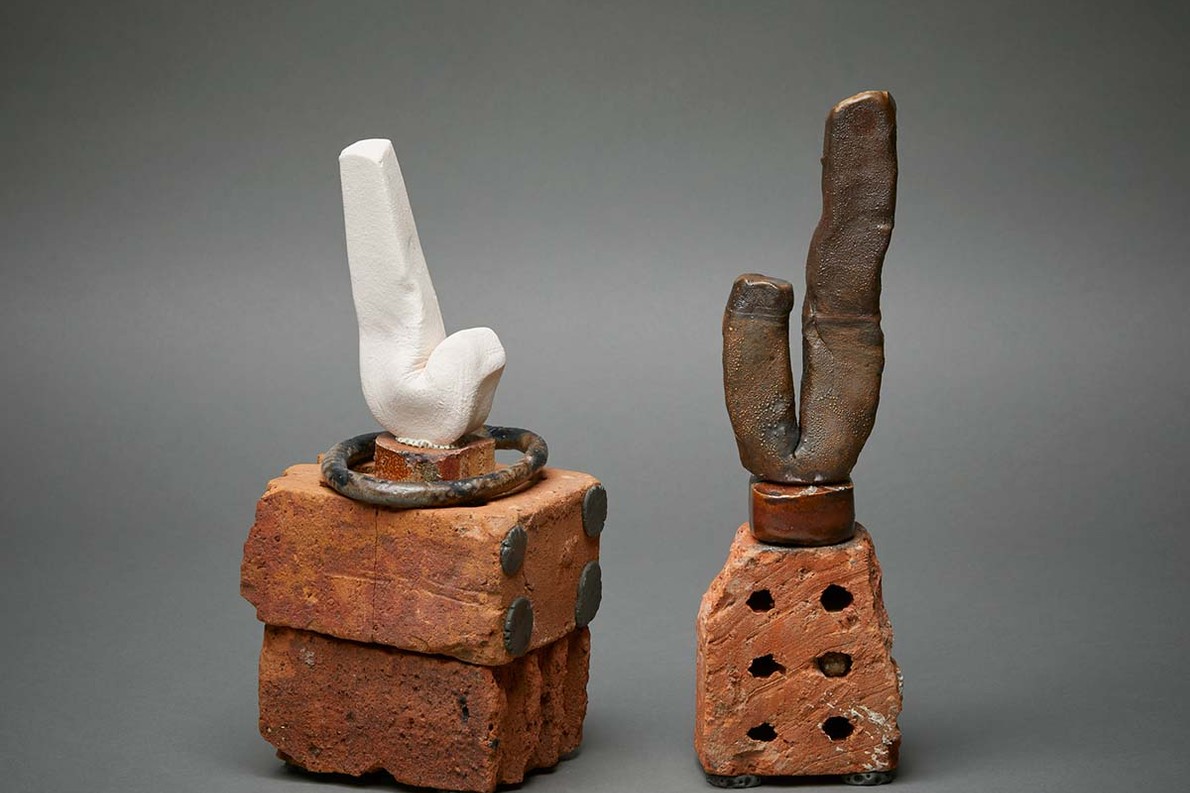 A pair of far-flung moments in history set the conditions for the exhibition 'Tender Brick: The Material Epiphanies of Peter Hawkesby'. The first was when Picasso used glue to make constructions that irrevocably altered the conception of sculpture as a form of ‘carving’ or ‘modelling’ of a singular form. The second is the audacious choice Hawkesby made during the mid 1970s to entirely dispense with the potter’s wheel and make ceramics by any other means.

In seeking sudden relief from the wheel’s tyranny of symmetry, Hawkesby gave credence to clay as a means of expression, rather than ceramics as a discipline. From here, the artist has consistently defied the strictures prescribing his medium, and in doing so has fashioned an individual approach to the making of craft within the context of Aotearoa, unlike anything encountered previously.

The exhibition’s title salutes Gertrude Stein’s 1914 publication Tender Buttons, a work considered a triumph of unorthodox Modernist experiment on one hand and decried as pretentious posturing on the other. Academic roadkill or scholarly redemption, the polarisation around Stein’s achievement compares to the reception Hawkesby’s ceramic art has received over the years. Stein’s insistence on the primacy of ‘looking’ unencumbered by the preconceptions of language is consistent with Hawkesby’s insistence on the incomparability of ‘touch’. The exhibition Tender Brick tracks the range and depth of Hawkesby’s ceramic production since his return to full-time making in 2016.

Tender Brick: The Material Epiphanies of Peter Hawkesby and Judy Darragh: Competitive Plastics are the last exhibitions to be presented at CoCA Toi Moroki in collaboration with Objectspace in Tāmaki Makaurau Auckland. These exhibitions mark the end of a 12-month programme partnership, which has seen the organisations work together to develop and deliver exhibitions and public programmes.

Watch an interview with curator Richard Fahey and walk through the exhibition.

Richard Fahey is a senior lecturer in Design and Contemporary Arts at Unitec, Tāmaki Makaurau Auckland. His research activity is focused on material culture of Aotearoa. As an independent writer, critic and advocate, he addresses contemporary cultural production and its reception via the historical and institutional contexts of education, critical discourse, collection and exhibition. His research takes the forms of writing, curating and participation in the visual arts sector as a teacher, speaker, assessor and critic.

Peter Hawkesby was born in 1950, Cockle Bay, Tāmaki Makaurau Auckland. He began making pottery in 1974. It wasn’t until his return to Tāmaki Makaurau in 1977 that he found a conducive environment for developing his distinctive practice. From 1984, Hawkesby lived in Tokyo. Upon returning to Tāmaki Makaurau in 1994 he spent two decades as proprietor of the iconic café Alleluja in St Kevin’s Arcade. In 2016 Hawkesby resumed working fuIl-time in ceramics. 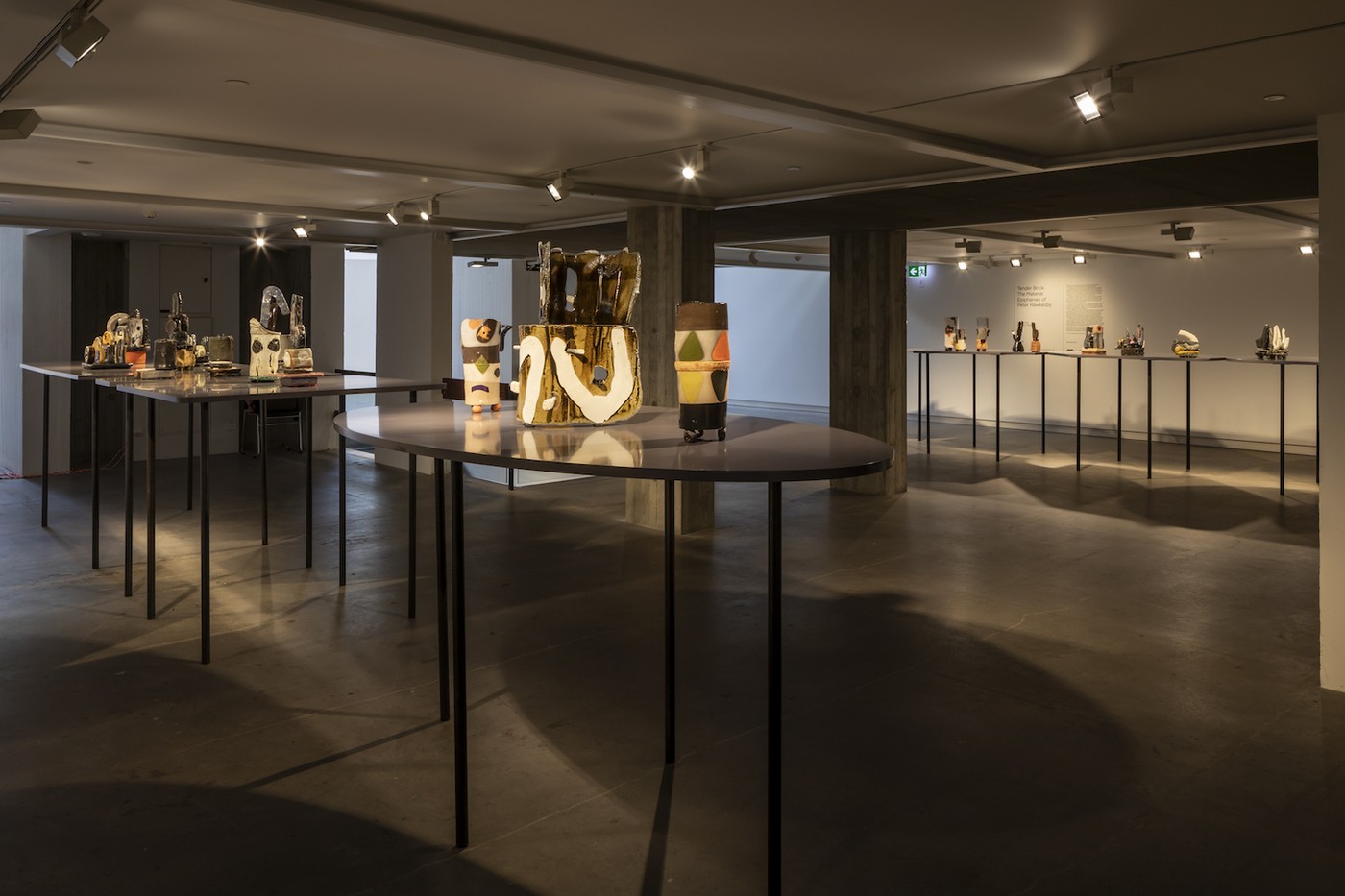 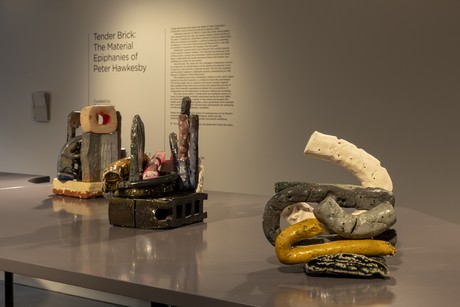 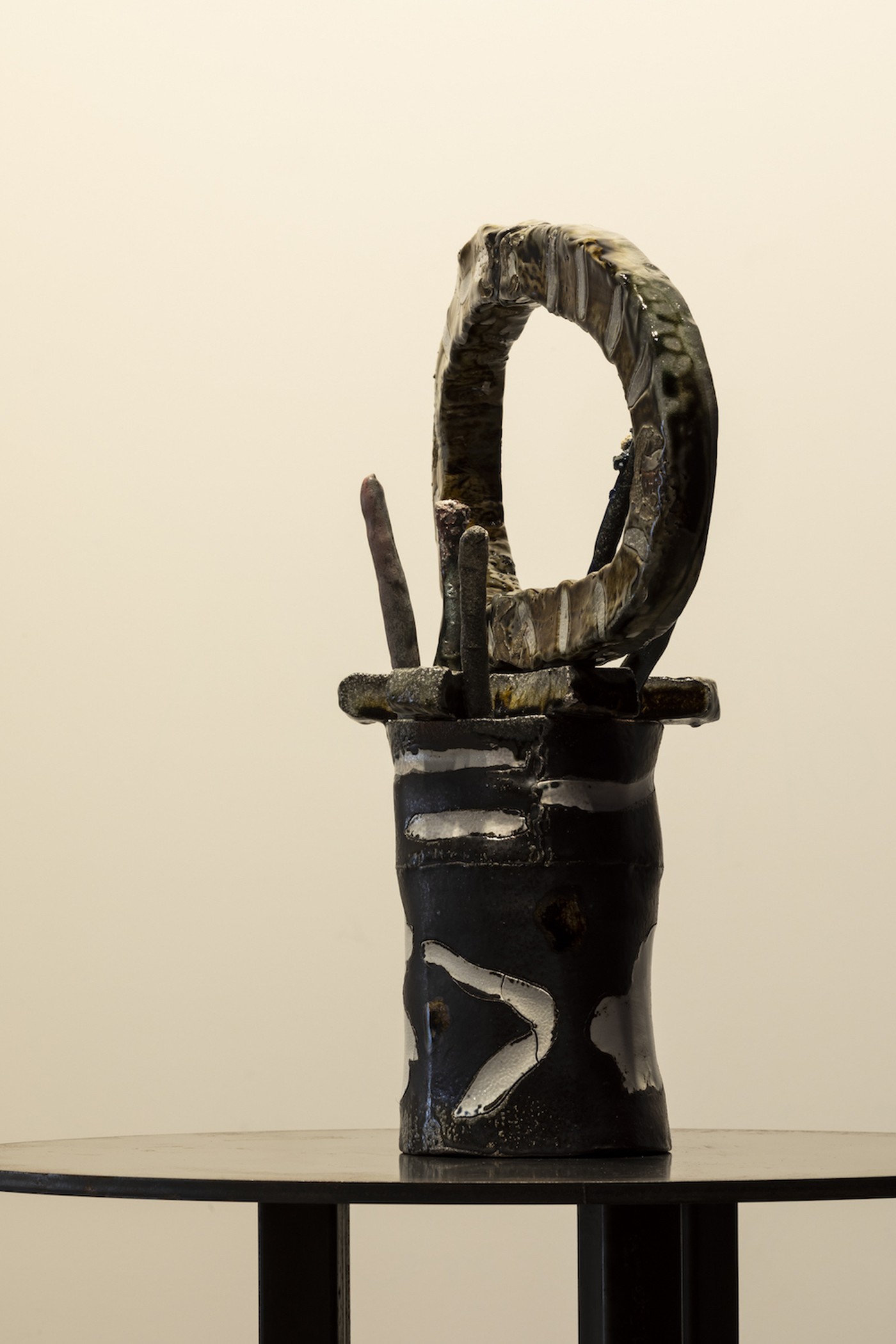 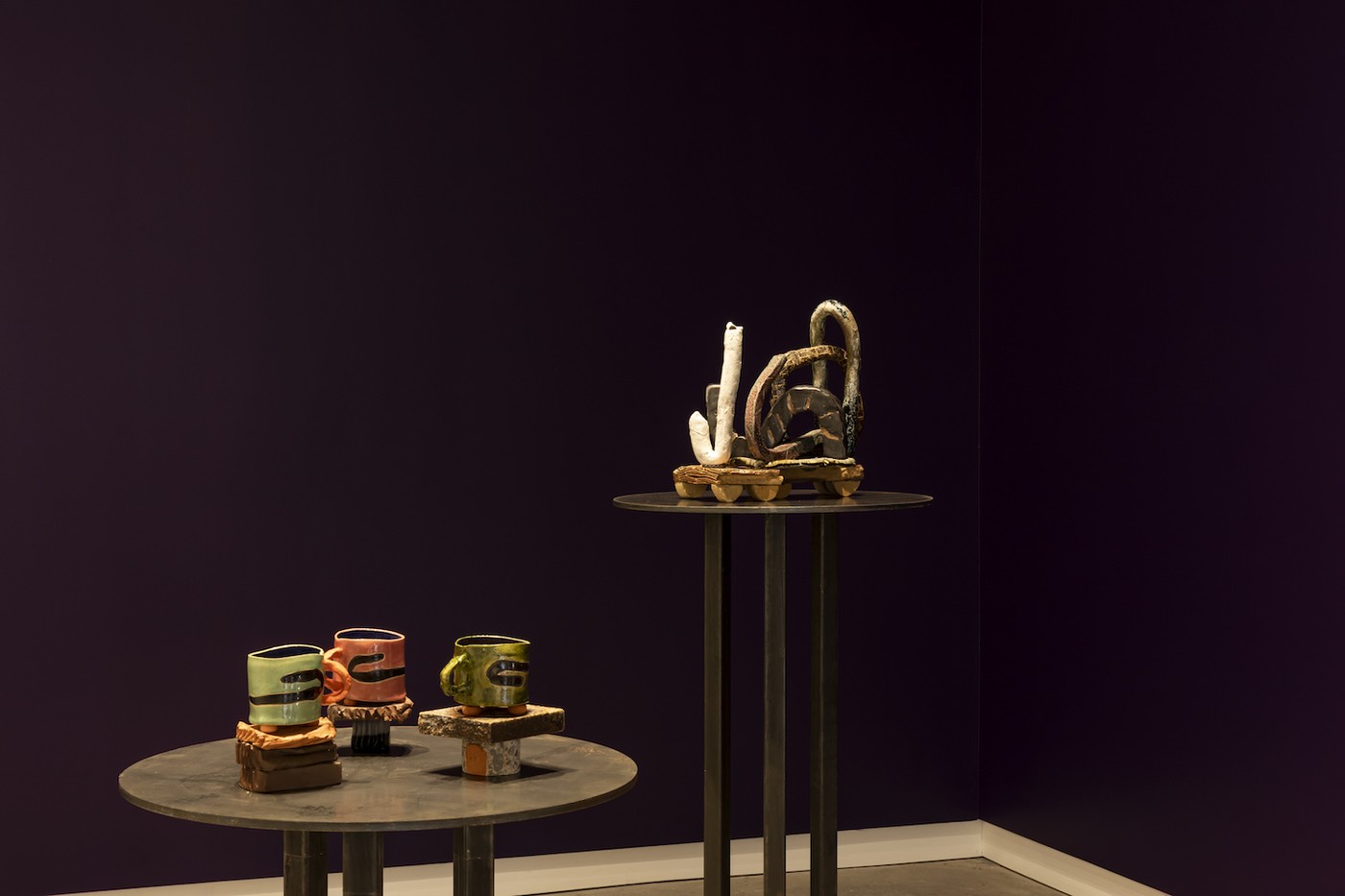 'Cups' and 'Stobos on the Road (to Kingston)', Peter Hawkesby

'Cups' and 'Stobos on the Road (to Kingston)'. Installation view at CoCA 2022, photo credit Sarah Rowlands 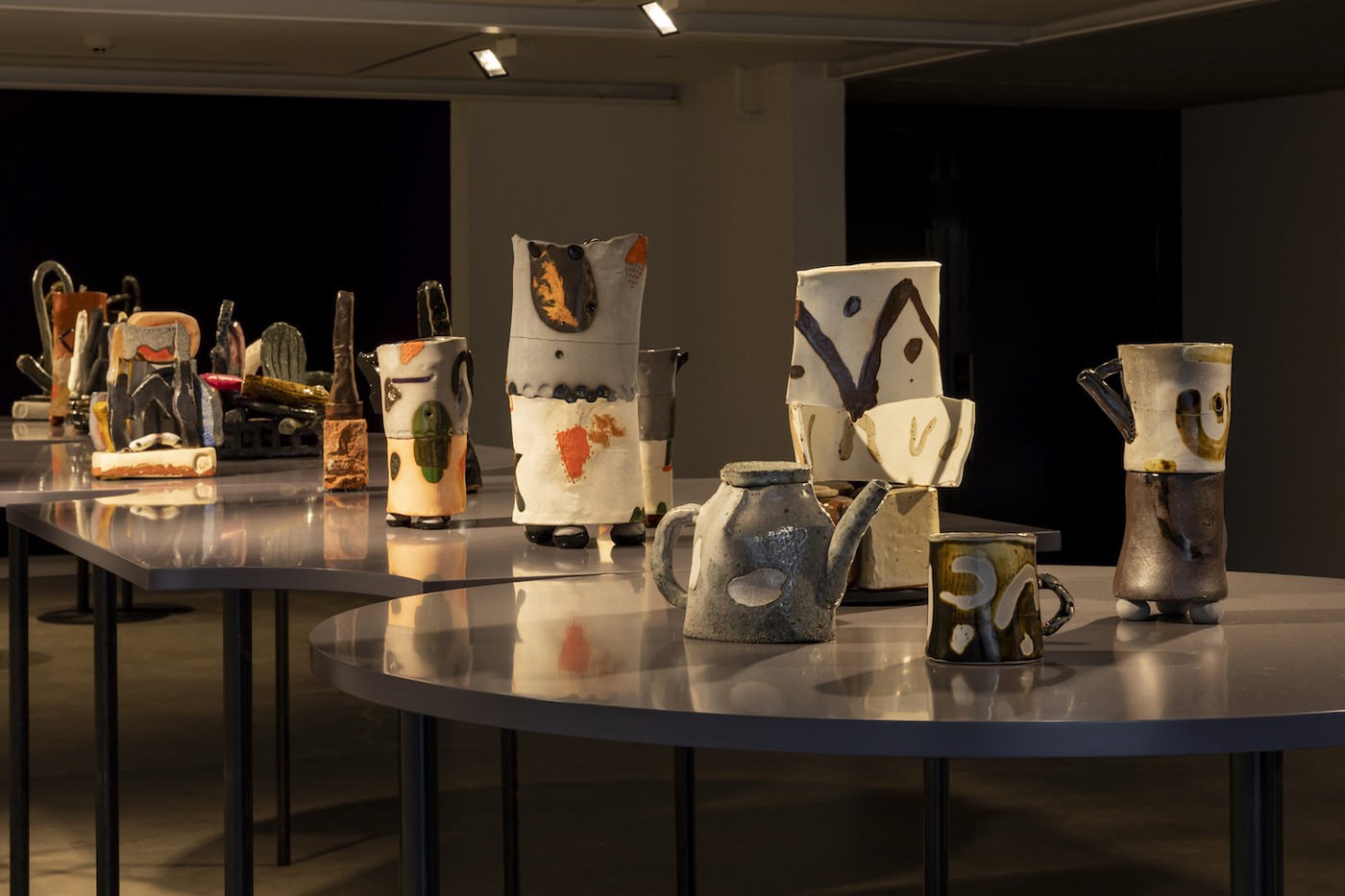 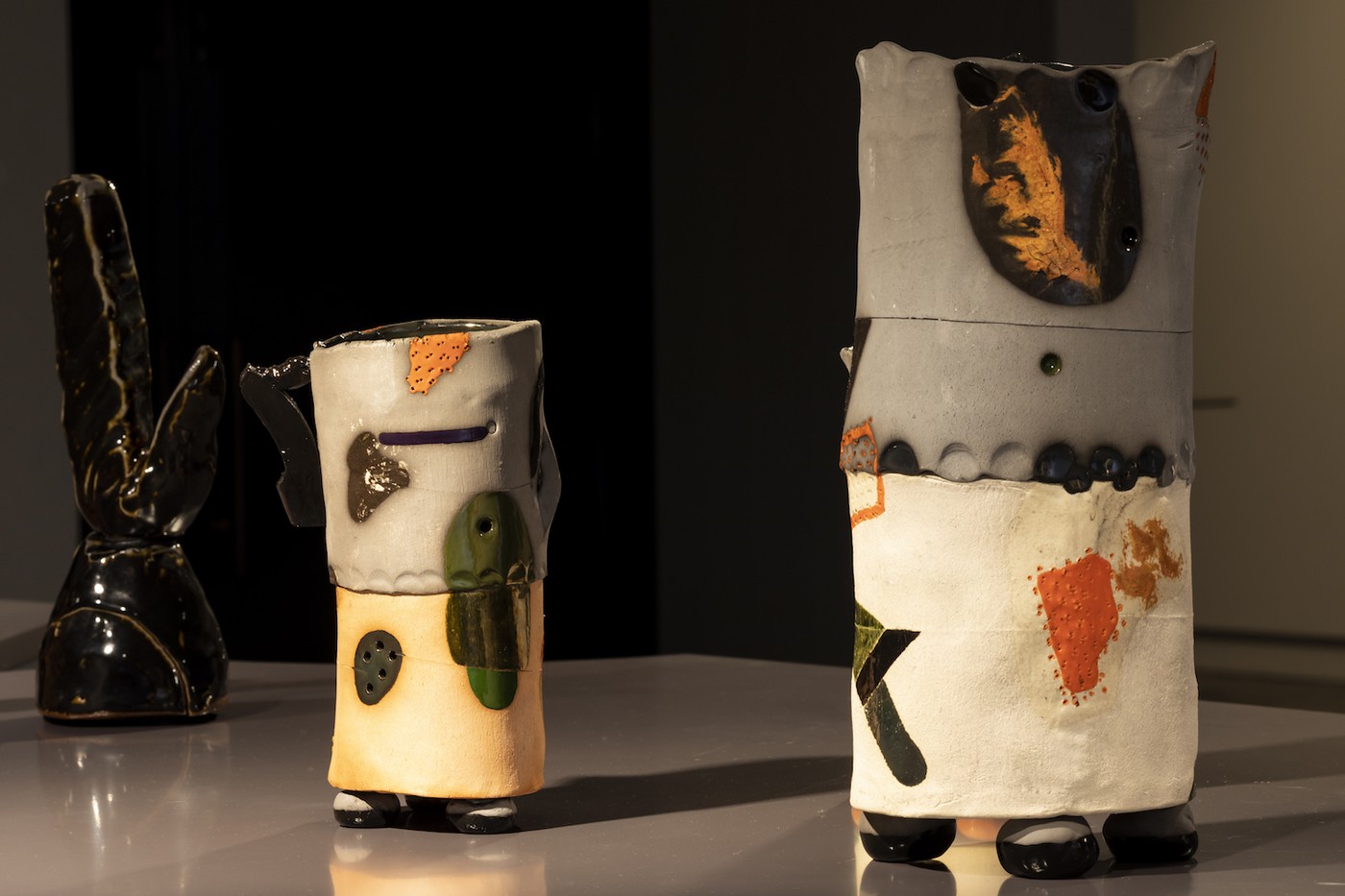